This is a very interesting article from CNN on how Heat Pumps can save thousands and why California among other states is requiring all new systems to be heat pumps… The topic is Heat Pumps: Changes in California 2023.

Air Conditioning Guys has installed hundreds of Heat Pumps, so when its time to replace we can help. 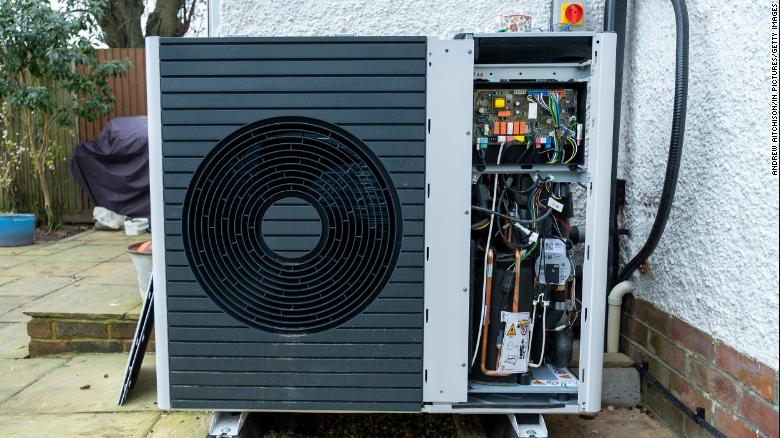 Heat pumps use less energy because instead of warming or cooling air, they move heat in or out of the house, depending on the season.

George, a former engineer, was initially skeptical that heat pumps — super-efficient electric heating and cooling systems — could do the same amount of work as oil. But the couple was surprised by how well they perform.

The UK will give homeowners $7,000 to buy heat pumps. But what are they?

“We couldn’t be happier with them,” Cathy told CNN. “For me, it’s the comfort. For him, it’s the efficiency.”

George, who used to keep a close eye on the thermostat for costs, said that switching from oil to electricity has saved thousands of dollars on heating in the last few years. The cost of heating oil in Maine has steadily risen from around $1 per gallon in 2008 to more than $4.50 per gallon in 2022.

Now he estimates the highest monthly winter electricity bill he’s had to pay is around $420 — and that’s when it gets really cold. Usually it’s $100 lower than that.

The Hardys are part of a growing movement of consumers who are choosing energy-efficient electrical heating and cooling in Maine and around the country. When Maine Gov. Janet Mills took office, she pledged to install 100,000 heat pumps by 2025 to help wean her state off fossil fuel and meet her climate targets.

“We are definitely on track to hit that goal, or even hit it early,” Dan Burgess, the director of the Maine governor’s Energy Office, told CNN. “As the technology has gotten better, people have gotten used to having them or maybe know someone who has one. They’ve really taken off.”

Heat pumps have a leg up on traditional air conditioners and furnaces because they aren’t using energy to heat or cool air — a very inefficient process. Instead, they use energy to move heat in or out of the house.

In warm weather, heat pumps act as air conditioners by taking heat from indoors and pushing it outside. During a recent heat wave over 90 degrees, the Hardys said they were cool in their home.

Power outages are on the rise, led by Texas, Michigan and California. Here’s what’s to blame

“I can’t tell you how comfortable we are,” Cathy said. “It’s not freezing like a window AC [that’s] harder to control the temperature. We don’t touch the thermostat.”

In cold weather, heat pumps consolidate heat from outside and push it indoors. And yes — there is still enough heat energy outside in the winter for the heat pump to warm your home, even when temperatures are very cold.

Heat pumps of the past always performed best in warm and moderate climates — ones that don’t get too cold. But the technology has advanced, making them more capable of heating homes in uber-cold temperatures.

“The American consumer’s perception is ‘heat pumps don’t work in cold climates, why would I want one?'” said Mark Kuntz, a CEO for Mitsubishi who oversees the companies US heat pump and HVAC operations. “The excitement in this is around a special type of heat pump that can produce an efficient heat — even in sub-zero temperatures.”

Driving down the upfront cost

Heat pumps tend to have a higher upfront cost than a traditional gas or electric furnace. But when compared with replacing an entire home heating and cooling system, the cost can even out — depending on the home.

In addition to state rebates and tax incentives, new federal incentives are coming to help bring down the cost of these appliances.

How the climate bill could save you money on electricity, cars and appliances

The law provides tax credits to cover 30% of the cost of installing highly efficient ACs, water heaters, furnaces and other cooling and heating equipment. Households can receive up to $600 for each piece of equipment, and up to $1,200 total per year. There is also a special credit of up to $2,000 for electric heat pumps.

The subsidies get even larger for low-income families. The law gives low- and moderate-income households rebates of up to $14,000 to buy electric appliances — which would go a long way to cover a heat pump — as well as much of the cost of electric water heaters, stoves and ovens and clothes dryers, as well as upgrading the home’s breaker boxes and electric wiring.

The Hardy’s love their heat pumps for the energy savings and ease of use, but George is also happy to move away from consuming fossil fuels for another reason.

“For the climate change today and everything else, if you want to get away from oil, push the heat pumps,” he said.